Fencing and modern pentathlon in Finland

Fencing (also known as sport or Olympic fencing) is a sport in which two people use modern variations of swords to score points by hitting their opponent on valid target area. The “sport” or “Olympic” qualifier is typically added to distinguish the modern sport from other forms of historical re-enactment activities. Fencers make use of electronic scoring devices to register touches, while referees administer the rules and arbitrate the flow of the match. There are three events inside the sport, each with a different set of rules: foil, epee, and saber. 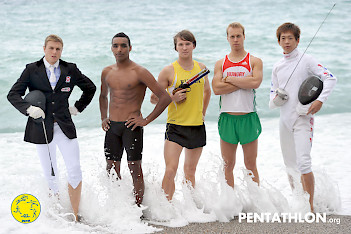 Modern pentathlon is in turn a good choice for those with passion not only for one but several sports. Modern pentathlon consists of five different events: fencing, swimming, horseback riding and a comined event with shooting and running. These events are very different from each other and require different properties.Fencing and riding requires versatile technique and experience, swimming and running requires physical performance and speed, and shooting requires concentration and nerves of steel.

Would you like to have more information about fencing and modern pentathlon in Finland ?
Please contact Secretary General Mrs. Lena Tallroth-Kock, 050 3362464 or lena.tallroth-kock@fencing-pentathlon.fi